Posted by Ben
At the UW we've been heavily invested in Avaya telecommunications products for nearly two decades. In particular, we've been invested in the DEFINITY platform, now called Communications Manager (CM). We started using CM when it was owned by AT&T. It was later acquired by Lucent and then separated to become Avaya.

CM is the cadillac of enterprise phone systems (PBX) with almost every feature imaginable. Like many enterprise vendors, they provide GUI applications written for Windows and they work fine--if they have the features that you want to use. Once you want to start integrating with other enterprise systems and automating tasks, you run into situations where the provided tools hinder work more than they help.

The primary interface to these PBX systems is with a terminal. Originally it was a serial terminal but now telnet and ssh are available. When you log in you select a "terminal type." Most people use the screen-based VT220 interface where you type commands and use tab and return to move around the screen to make changes. It's not fun to use those screens for scripting, but there's another undocumented terminal type called "OSSI" that's designed for scripting and is used by Avaya's own GUI tools.

In this post I'll describe the web service system I've built around the OSSI terminal connection. The end result is contained within a Perl module that comprises the heart of this system.

The system breaks down into three parts:

1. DEFINITY_ossi.pm
2. A separate PBXD server instance for each PBX.
3. A single web CGI interface that passes XML requests between the client applications and the correct PBXD instance.

DEFINITY_ossi.pm is the Perl module that knows how to connect to all of our PBX systems, process commands, and return data either formatted like the output of the VT220 screen or as a set of OSSI fields.

PBXD is a server based on the Net::Server::PreFork CPAN module that manages a pool of connections to a single PBX and provides an XML interface to DEFINITY_ossi.pm. There is 1 instance of PBXD running for each of our 3 PBX systems. Each PBXD instance has its own config file.

Finally the web interface is a Perl CGI script that knows about each PBXD instance and proxies the XML requests from clients to the specific PBXD instance for each PBX.

Here's a visual description of the system 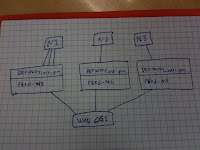 Once it's setup and deployed you have a scalable platform for rapid development of web applications to manage all of your PBX systems. We've moved both batch and interactive application to the new system and it's been working well. I hope you've found this post interesting and that it will give you some ideas and code that can help manage you own PBX systems.
at 1:55 PM